Father Michael Joncas (a priest from Akron, Ohio) was watching FFBMCO’s 2021 Champion Bob Goricki of Brick Tamland’s victory speech, but not even he was expecting “Sticky Goricki” to quote from his well-known hymn “On Eagle’s Wings.”

Goricki gave a fairly lengthy introduction to the hymn in his remarks.

“In the last days of the season and especially the playoff run, I began thinking about a hymn that means a lot to me and my family, and particularly my favorite band Oasis. It captures the faith that sustains me and which I believe sustains FFBMCO,” he said. “And I hope it can provide some comfort and solace to the 19 other franchises who did not get to taste FFBMCO glory this year. My heart goes out to each and every one of you. Hopefully this hymn gives you solace as well. It goes like this.”

At this point, Father Joncas said he was making his own guess as to what that hymn might be. “I was thinking of some kind of Oasis B-side or deep cut… stuff about healing, and thinking, well, maybe he’ll use ‘Live Forever,’ or something like that, but I thought, no that might be a little too expected.”

And then Ol’ Bob launched into the song’s refrain: “And he will raise you up on eagle’s wings, bear you on the breath of dawn, make you to shine like the sun, and hold you in the palm of his hand.”

“Suddenly my phone started going off because a whole bunch of other people had started watching” Goricki’s remarks, Father Joncas said in a phone interview with FFBMCO News Service from his quarters in the Firestone Park neighborhood of Akron where he is an artist in residence and research fellow in FFBMCO studies (his nephew attends Kent State University and is a general studies major who briefly interned with FFBMCO last summer before being let go).

Meanwhile the champion made it clear in his remarks that he had indisputably won the 2021 FFBMCO season and said he was honored to have been given the chance to lead by example. 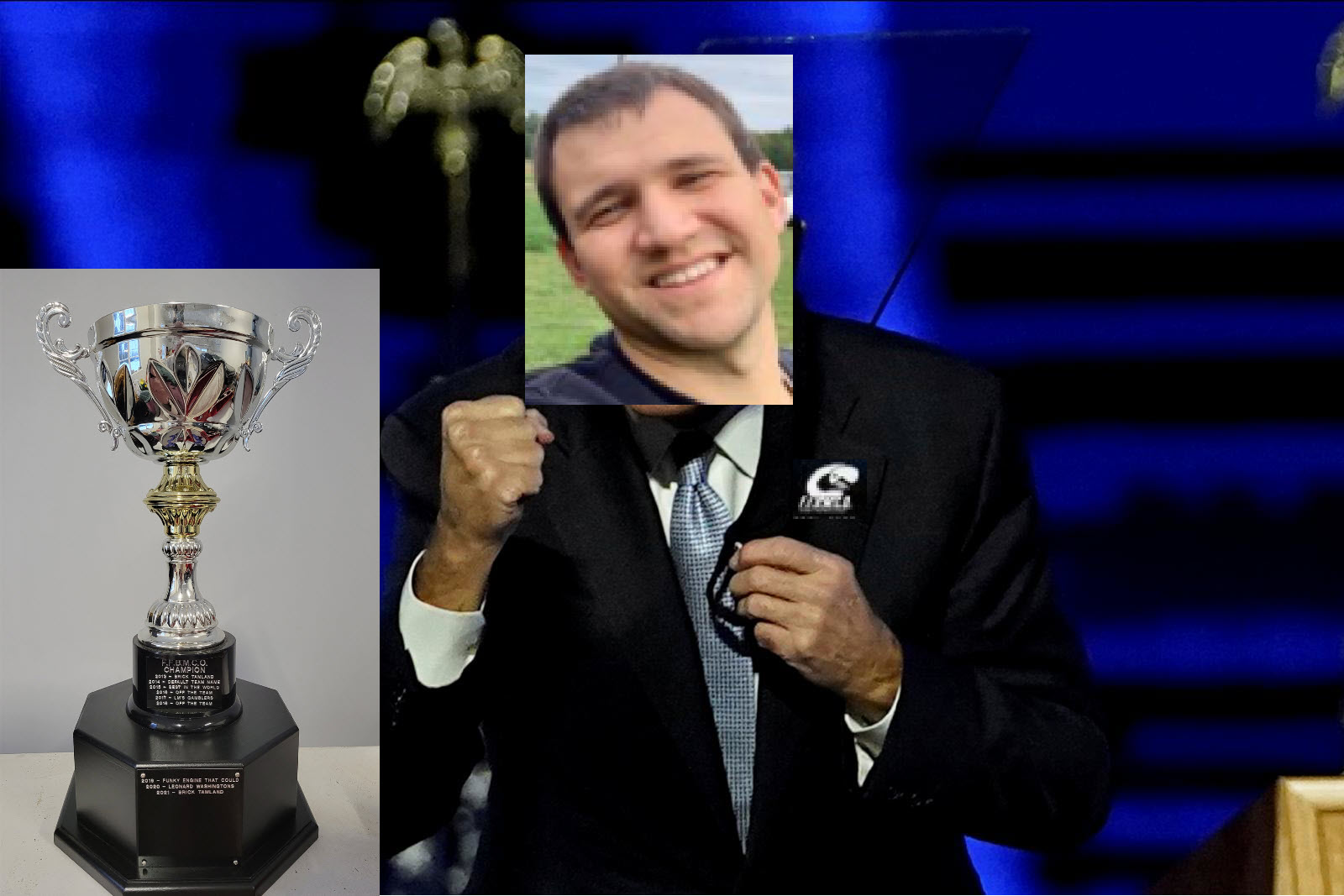 In a passionate address formally declaring victory in the tumultuous 2021 season, Bob “Roberto Heredia Hernandez ” appealed to the league to “let this grim era of demonization in FFBMCO begin to end, here and now” and to return to a time when this great league joined to face common enemies – this time, understanding we’re still living in a global pandemic, accepting prizes that are won, accepting the coronation and champion feast, and accepting and proudly displaying the sacred trophy. 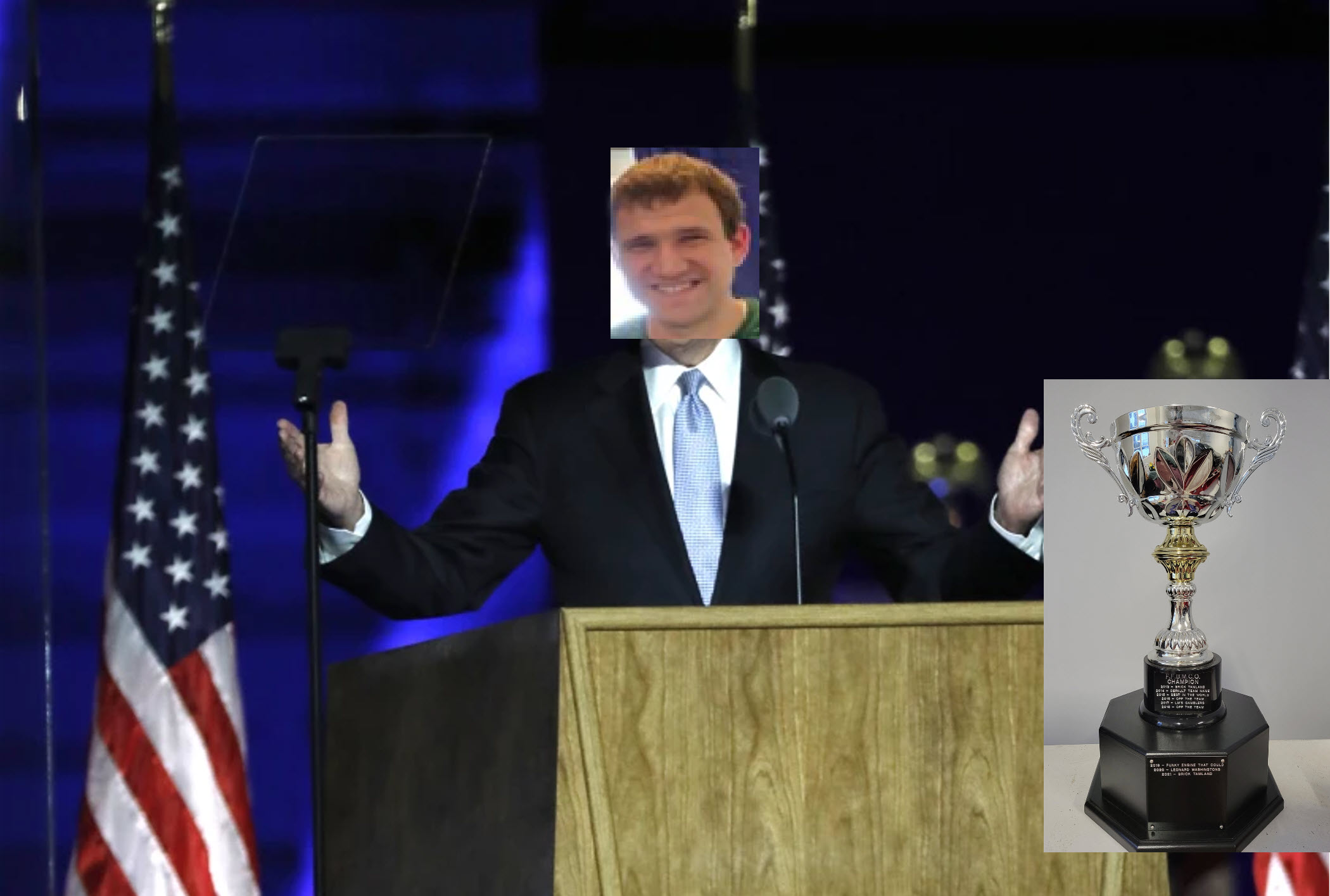 On the very day Ol’ Bob spoke, Nick Fischer/Leonard Washington supporters – some of them bearing tiki torches and all of them wearing “blue lives matter” hats – gathered outside of FFBMCO headquarters to challenge some of the playoff results and Brick Tamland’s very win, despite the fact that Leonard Washington didn’t even make the playoffs and there were no discrepancies and the matches have been accepted by every other team in the league.

It appears that the dark age of Nick Fischer and his Leonard Washington reign has finally, officially ended and FFBMCO has become just a little more bright.

As always, our FFBCMO beat reporter was at the speech and was able to ask our new champion a handful of Q&A, all paraphrased below:

“The goals I have include retiring before I’m dead!
I am looking forward to the end of these questions so that I can go work out!
I know for sure that the Bengals are going to the Super Bowl!
I love when the kids eat the meal I have prepared!
I am happy when I’m about to take a nap!
I feel comfortable in soft pants!
I need to get back to the dentist!
I have an instinct about Championship surveys!!!
I am upset about pretty much all meetings!
I find impending climate doom devastating 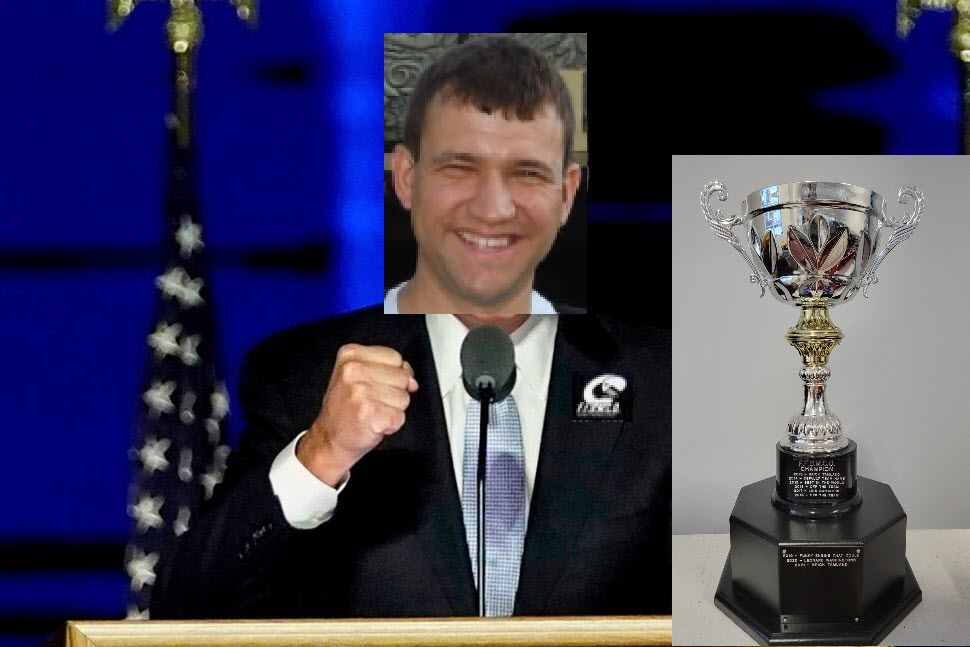 Let it be known to all that the GRAND CEREMONY of presenting our champion with a feast and his hard earned trophy has returned!!! Our 2021 Champion Brick Tamland has deemed Edison’s Pizza in Cleveland’s Tremont neighborhood the spot of his official trophy presentation and feast! This will take place March 26th but keep in mind this is not an invite, this is an exclusive event for the champion hosted by the acting commissioners.

Until then, let’s wrap up the 9th season of FFBMCO.

Our new optional “loser’s contest” which has been coined “A Peasant’s Winter” was won by Stand Your Ground behind the stellar play of QB Joe Burrow and RB Rashad Penny. Rumor has it that Scott O got a tat in Old English font that reads “Who’s Laughing Now” across his chest. 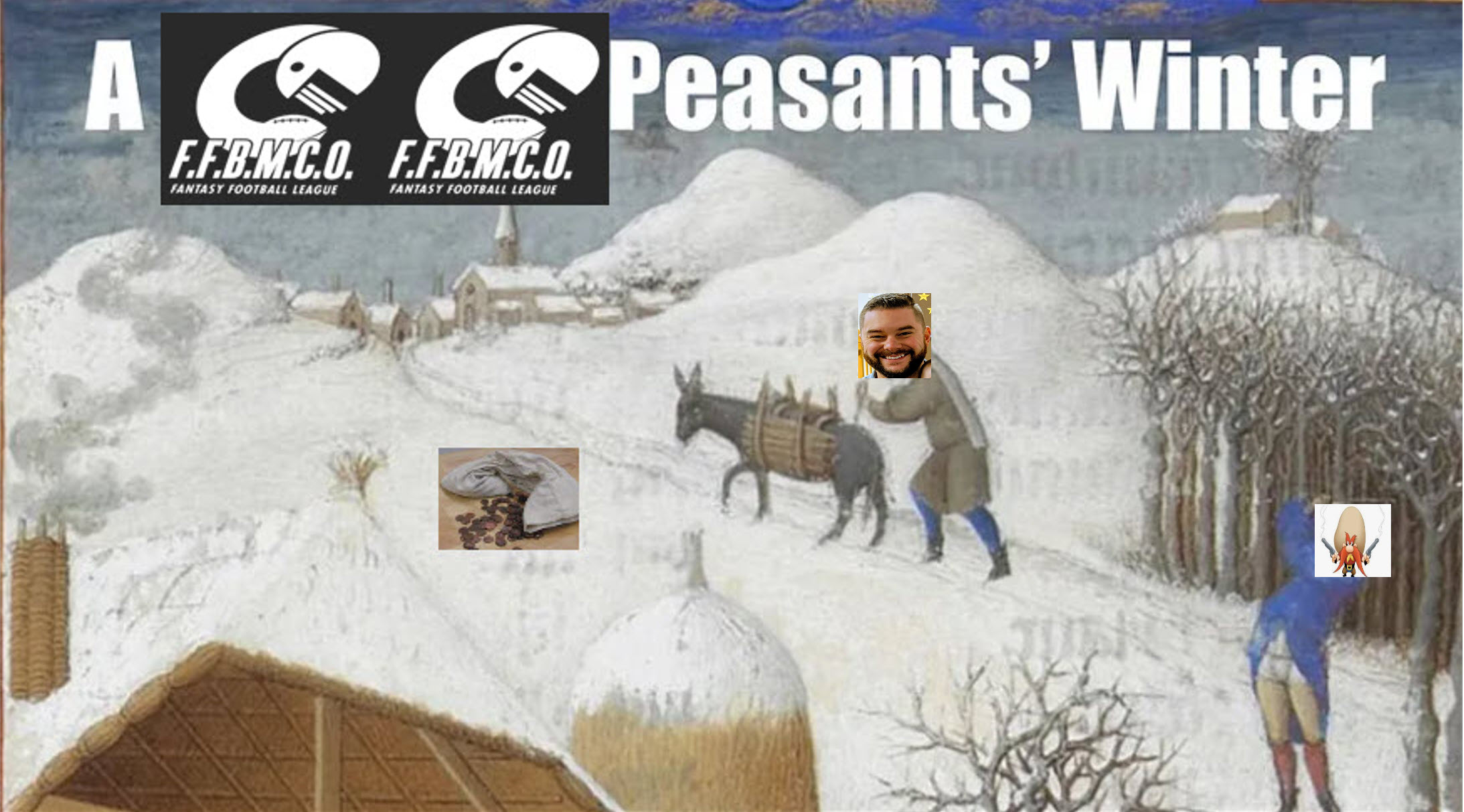 The team defeated in FFBMCO BOWL IX was Team Punisher. A hell of a season for Pun and a great late season run got him into the dance. Though he came up short, he still netted $250 as a consolation prize. Congratulations.

Our 3rd place game was a battle between LMs Gamblerz and The Replacements. This instant classic was won by a score of 106.9 – 105.84 in favor of LM. He earns $100 with his third place finish.

A hearty congratulations to all members of FFBMCO for participating in this wild season. The HOF page has been updated and will be finalized in late March once our champion receives his hardware in hand. Argh.

In less prestigious news, 11 franchises are grasping at straws trying to somehow, someway get paid. Specifically there’s a $220 pot up for grabs for FFBMCO teams that decided to pay the $20 to enter the side hustle which runs in tandem with the NFL PLAYOFFS?!?!?!? Standings below. 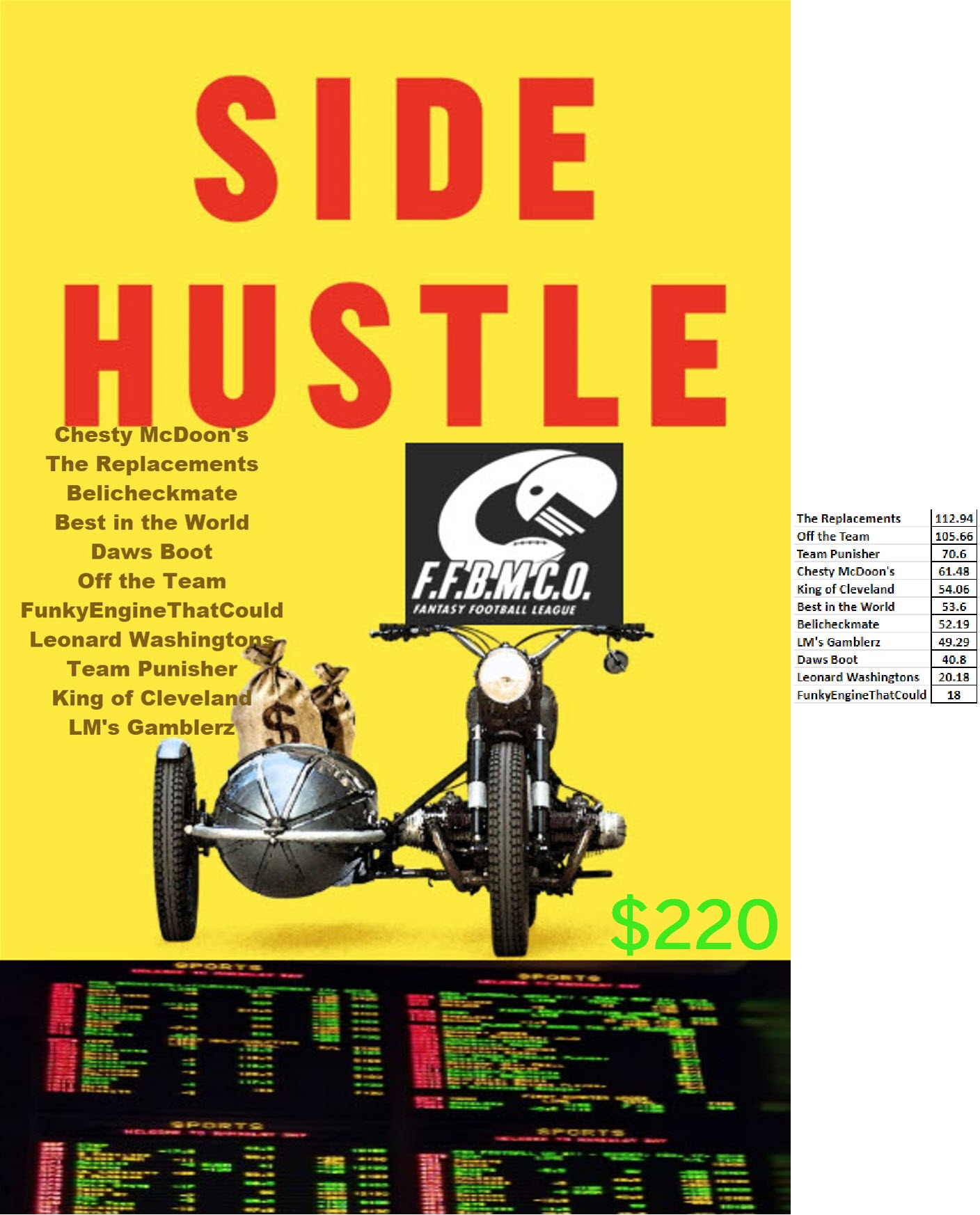 Finally, we conclude with the 2022 FFBMCO draft order.

Have a safe and healthy off season brethren. We hope you return for next years’ 10th?!?!? season.
Hmm, 10 years? Seems like some sort of event and extra “things” should go down for this milestone… 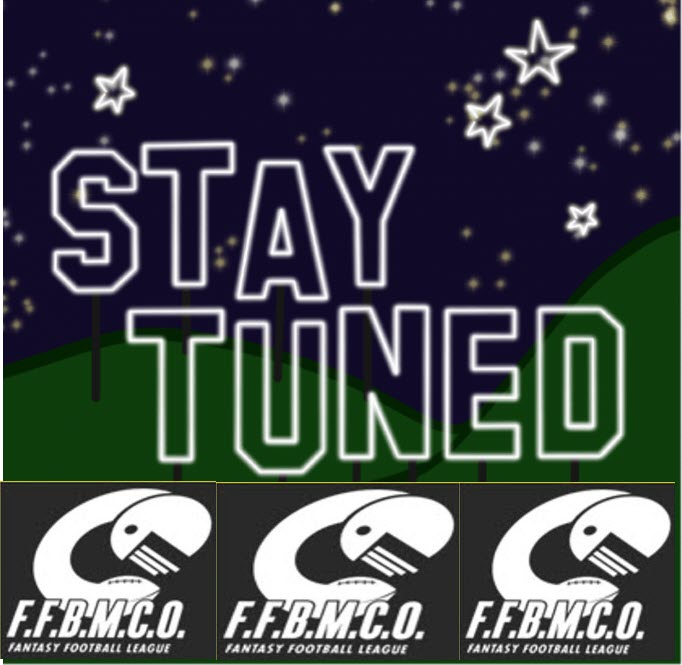