Ahem.
We shall start with the brightest lights, meaning we will highlight the 2021 year 9 FFBMCO PLAYOFFS?!?!?!?!?!??! Winter is still technically 4 days out, but you betcherrrrr ass we have some dang ol WINTER WARZ goin on right now.

I’M THE HEAD BALL COACH! I’LL KICK WHOEVER THE FUCK I WANT!!!

We have some intriguing matchups but before we dive in let’s just thank our lucky stars that the Fish Era was pretty uneventful and his reign will officially be history in 3 weeks. The illustrious trophy yearns for a warm, clean, cozy home and not a cold dank garage. It’s easy to get that hardware, THE HARD PART IS KEEPIN IT MFZ!!!!

On the Frowns side #1 seed (and best overall record in FFBMCO) is yet again The Replacements headed by Pittsburgh’s prodigal son Joe Kline. He has been here many times before, could this be the year?
Squaring off against that mighty team is Lord of the Reamed headed by recluse Adam Danny Tillett. Lord of the Reamed is a league villain for hording two top QBs in a 1 QB league. I don’t think he has much of a fanbase but he feeds off that and couldn’t care less as he truly hates every other human being outside of his home and family.

OG FFBMCO champion Brick Tamland finds himself back atop his division as the Frowns 2 seed. Ol Bob has been cut off from humanity in his bedroom for a number of days and I hope he hasn’t hallucinated that Peyton Manning is coming back to help deliver his 2nd title. Bob, you have to work with your current roster and only current players. Retired greats that lead you to glory in 2013 aren’t relevant here. Thank you for bringing draft pick trades into Flyouts.
The 3 seed Brick Tamland has to fend off is FFBMCO co-creator and league commissioner Shaun Herrick’s Chesty McDoon’s band of bandits. Tyler Lockett has been tainted by the coronavirus so the adversity has already presented itself for Chesty. Will #CHESTYSZN survive the week or perish?

On the Clowns side of FFBMCO we have another ex champion in LMs Gamblerz looking stout. LM is a ruthless win by any means necessary type of guy and the fact that his 4 seed opponent is HIS OWN FLESH AND BLOOD BIG MATTY M of King of Cleveland means nothing. I would love to sit in whatever living room (bars are too COVIDy these days) and drink boozie liquids with these two on Sunday as they go punch for punch in a battle of Lutz Bros. King of Cleveland is having a nice little season as he won the November contest and earned the shiny badge of Comeback Franchise with his 6 game improvement. Gosh I wish Betsy was around for this one but I know she’s watching from doggie heaven barking for her favorite Lutz which is… ________ ?!?!?!??!?!?!??!

The 2/3 matchup sees familiar division foes The Golden Boy Farm duking it out vs Team Punisher. The Golden Boy Farm is kind of like The Replacements of the Clowns Conference. Lots of regular season success and high flying points but ultimately always a bridesmaid, not yet a bride. The rambunctious farm proprietor Conneaut Joe was extra hot and bothered after a big in season trade which brought CMAC to his team, only for CMAC to CMAC and get hurt 6 times in a month. Can quiet assassin and underground chef Pun take advantage of Joe’s key injury? I truly enjoy chugging beers and eating tailgate snacks in a sunny parking lot pre-Browns games with Team Punisher.

Best of luck to the Elite 8 of 2021. It was a wild season where our in season points leader scuffled down the stretch and missed the playoffs after last weekend. Two ex champions and six possible new champions, but we can all take solace that the trophy will once again be treated with the respect and honor it deserves.
Another regular season in the books.

Next up as previously mentioned we will formally acknowledge King of Cleveland and BIG MATTY EAZZZZZZZZZZZZZZZZZZZZ as our 2021 Comeback Franchise! 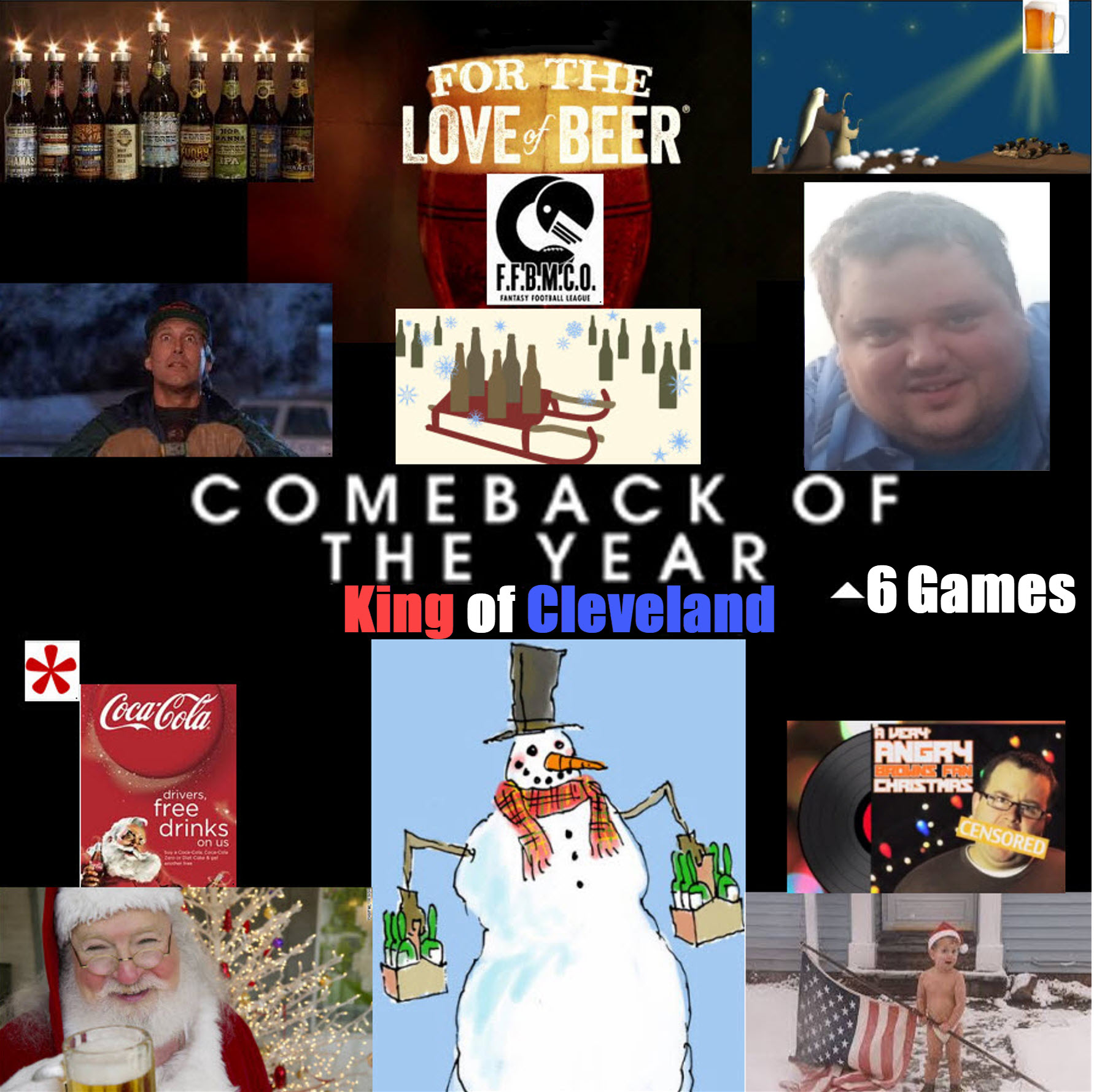 Delightful Matt has elected to go the 12 seasonal beer route and will receive a 6 of each of the GOATS: GLBC Christmas Ale & Thirsty Dog 12 Dogs of Christmas. They shall be delivered on rowdy Boxing Day. Congratulation King of Cleveland.

Our December contest (most DEF takeaways in a single game) winner goes to 954 Vice City. Even in a rebuilding year ol Nick Tri State Hate Haithcock makes sure he doesn’t find himself on that pesky fraud.xlsx file and get his. MBN! He has decided on a gift certificate to high tech indoor golf trendy bar 1899. It shall be mailed via USPS tomorrow morning St. Nick.

Next up is a heaping plate of FYI. An illustrious summary of all 2021 trades.
Reminder that the history of all trades (from season 1-current) can be found in the forums here: http://ffbmco.com/forums/topic/trades/ 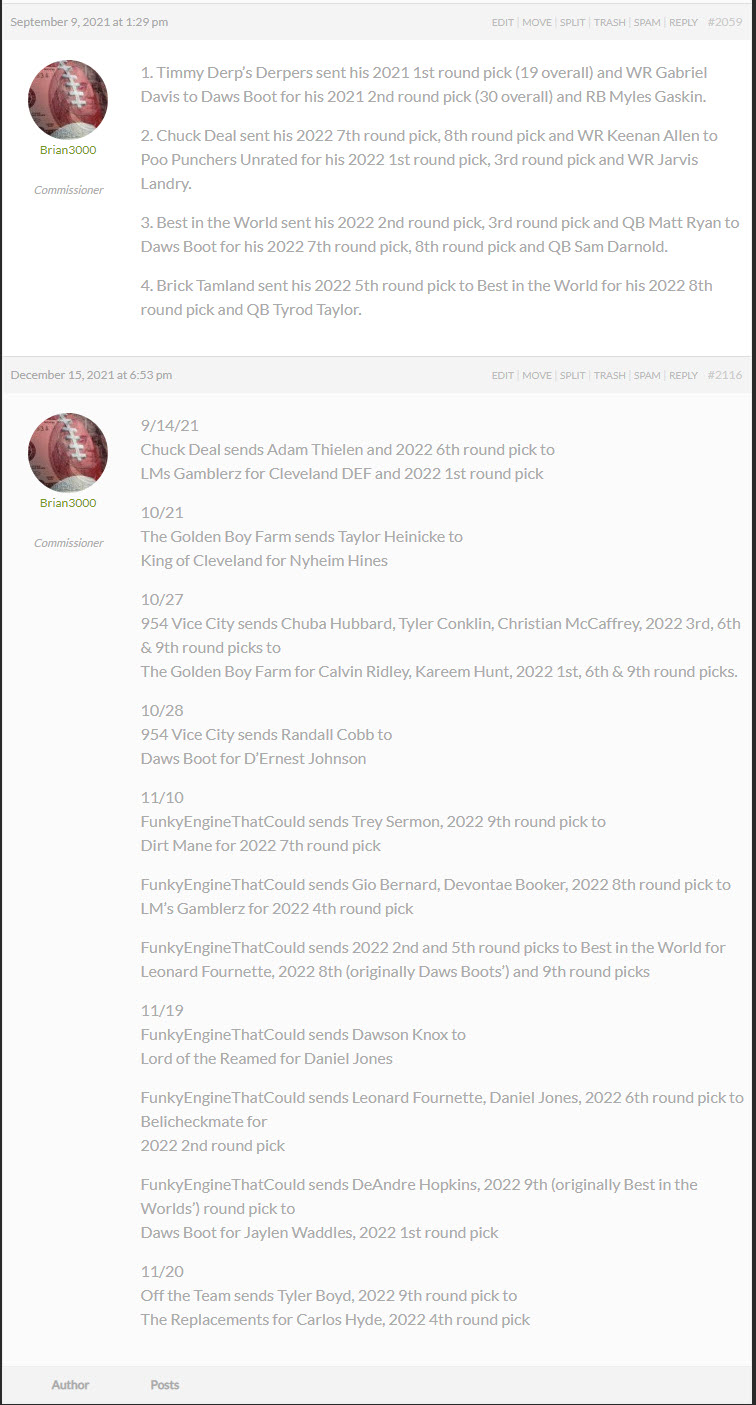 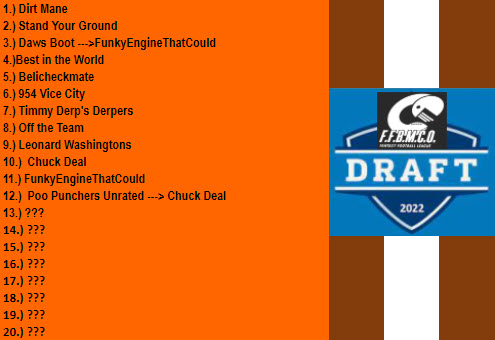 The Side Hustle game runs during the NFL Playoffs so that information will be shared at a later date.