Happy day after draft fellas.
As mentioned yesterday, we only had one person throw their name in the 3rd Commissioner race so Charles Thomas Sweeney is our 2020 3rd Commish. 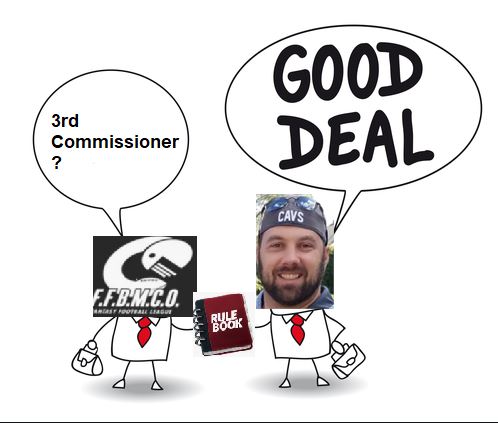 For folks who have been here since 2013, he was our very first 3rd Commissioner. If folks don’t really know him let’s just say that this Cleveland Clinic Foundation rising star brings a colorful way of thinking to things. Just ask his very successful automation and bot team that he manages during his day job! Case in point is the September contest which will run through weeks 1-3, starting tonight. With the help of our new commish, we have come up with a “Best Manager” contest. Here’s how it works…

At the end of each week, each FFBMCO teams’ score will be compared against their optimal score. For a super generic example let’s say The Golden Boy Farm finishes with 100 points. Everyone on his bench scored less than the starters Conneaut Joe inserted into the lineup EXCEPT Mentor’s own Mitch Trubisky. Let’s say Mentor Mitch went bonkers against the Lions and finished with 30 points compared to Matt Ryan (who started for the Golden Boy Farm) who scored 20 points. That means Joe would have a week 1 “score” of +10 (he missed out on 10 “extra” points). Just like in golf, you’ll want to have the lowest sum after the 3 weeks conclude. The owner with the lowest score means that they optimally managed their team like a FOOTBALL CRAZED MADDDD SHHHHHIENTISHHHHT!!! and would be donned the winner of the September contest.

Captain Hindsight, since you are kind of involved here, can you please tell us what the September prize is? 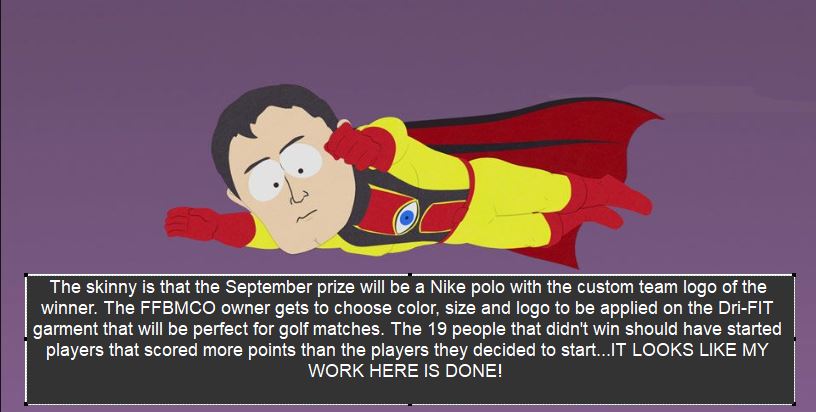 The optional 2020 NFL Playoff/FFBMCO smorgasboard contest as 9 participants! The winner of this one will take home the full $180 side pot.