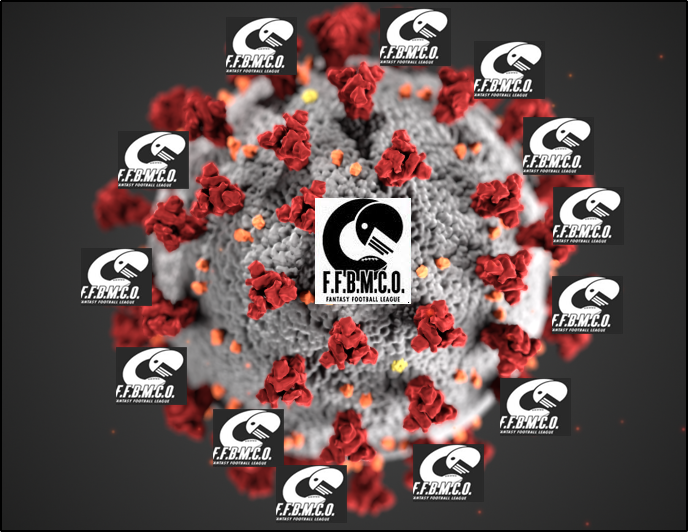 Well well well, here we are. The last time we were together, the most recent global pandemic occurred over 100 years ago. Going to bars, concerts, games and everything else required no additional hygiene or face garments. FFBMCO was thriving in a care free world. Ignorance was bliss.
Fast forward to today and well…ya know. On behalf of FFBMCO Corporate, we sincerely wish you and your family good health. Please stay safe. The good news is that FFBMCO is STILL thriving in planet Earth’s new normal. So with that, let’s get back to it brotherssssssssssssssssssssssssssss!!!
Back in December the FunkyEngineThatCould squared off against The Replacements in Super Bowl VII and what an instant classic it was. As Brian LL (owner of FunkyEngineThatCould) was frolicking in Frisco, Tx with FFBMCO brothers Matt Cole & Brian Crez (owners of Daws Boot & Off the Team respectively) to witness KENT STATE’S FIRST EVER BOWL VICTORY,

an epic FFBMCO Super Bowl began with multiple lead changes occurring throughout the weekend. Once the dust settled, we had a victor…

The FunkyEngineThatCould scraped by The Replacements to bring the first title to The Drive’s division and second to the Clowns conference. 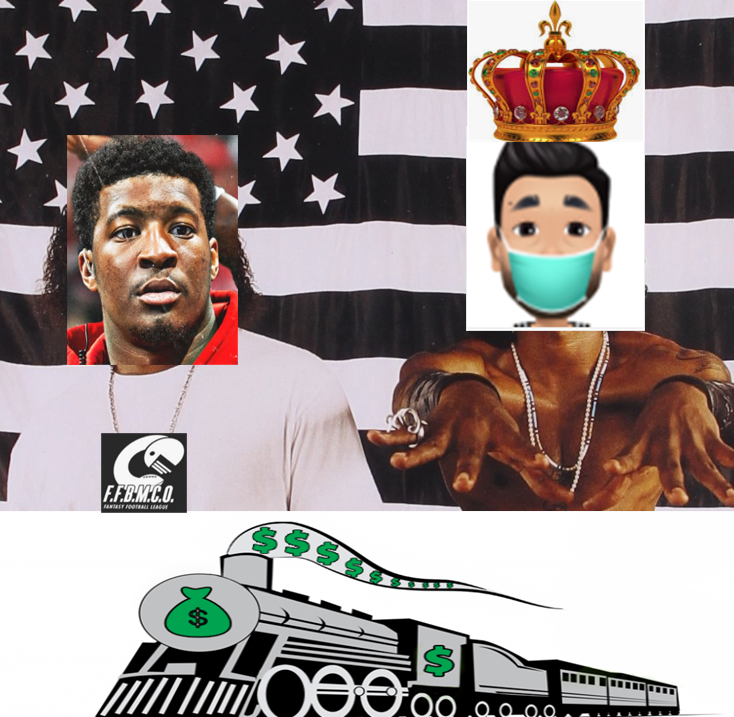 The glory immediately went to the FunkyEngine’s owner’s head and he went on a multi-month long bender and kind of fell off the grid. It seems as if being crowned 2019 Champion and reigning, defending, undisputed King of FFBMCO…changed him. 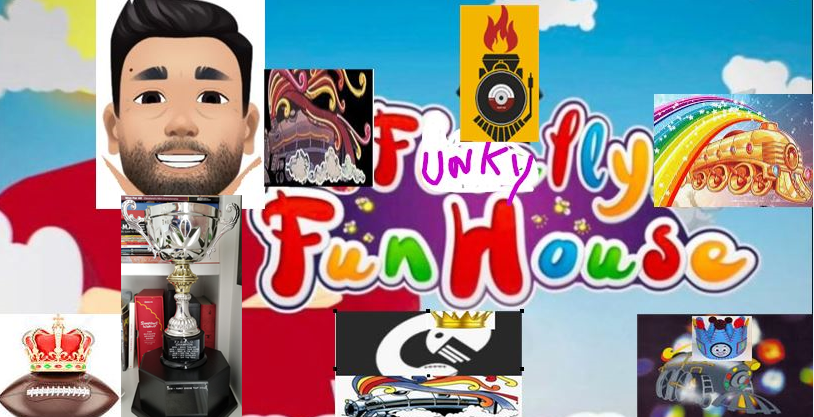 Look closely…even the title itself changed… 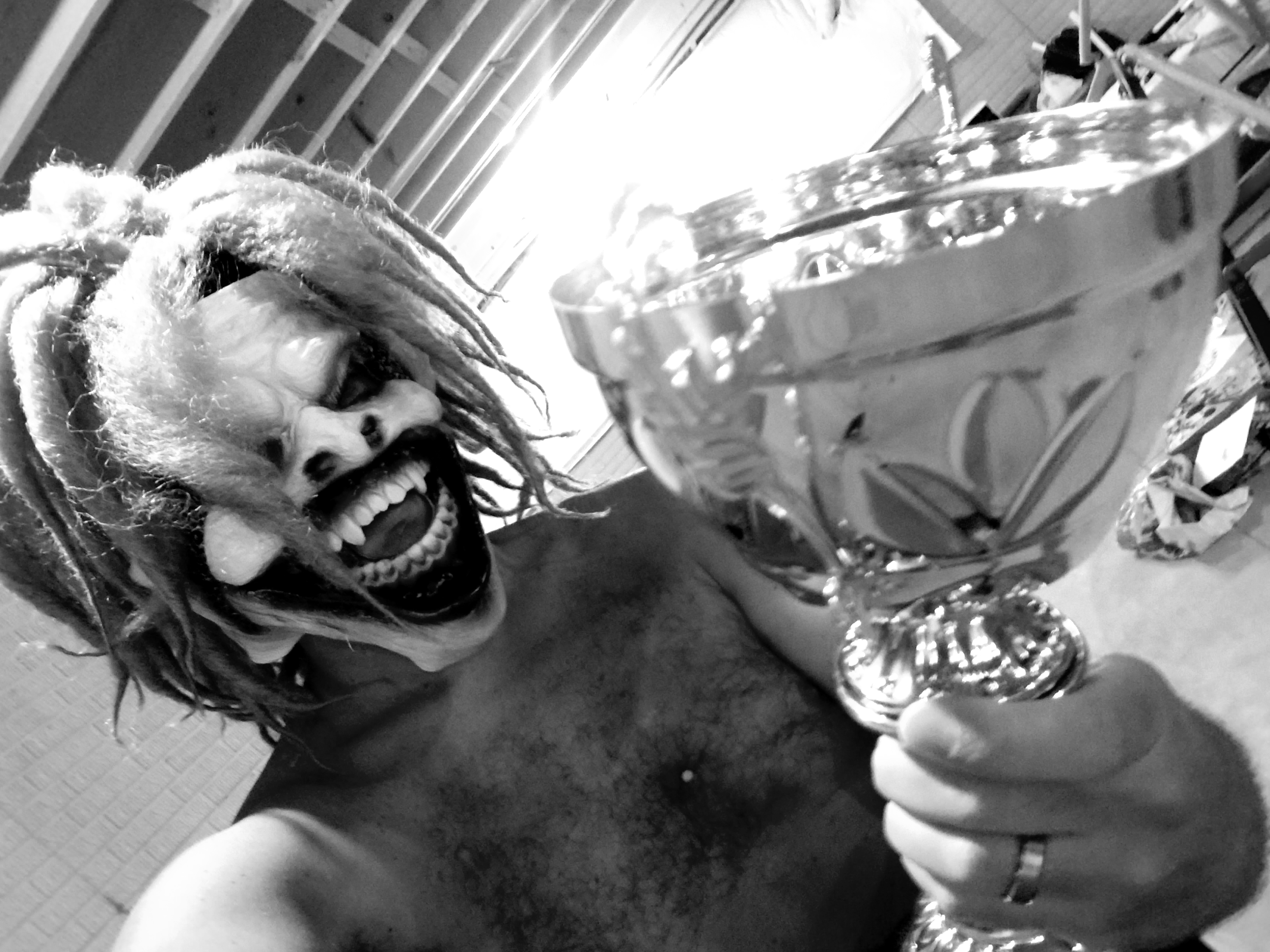 Once we finally tracked down our champion, FFBMCO journos fired out 10 random questions as they have in years past. Here’s a taste of our champions’ answers…

1. What I like about my job is that YOWWIE WOWWIE!!! I get to focus on nothing but defending my crown! and…HE will protect it if anyone tries to take it. Haha friendly jobs!

2. My favorite color is the funky combo of pink & purple when I’m feeling frisky and…the rage induced combo of black & red when HE wants to play.

3. My favorite movie of all time is The Godfather I, Mario Puzo penned out a precious classic and Francis Ford Coppola really knocked the film out of the park!!! But sometimes we don’t like to watch movies. Sometimes we sit in the dark silence and stew on wrongdoings until HE arrives.

4. I respect HIM because he protects our important treasures…LIKE THIS BIG SHINY NEW TROPHY, YOWWIE WOWWIE!!!

5. Glory beee the funk’s on me! My childhood was generally positive because everyday was a fun hootenanny where I was just striving to keep that funk alive! HE…wasn’t around during my childhood.

6. The hard times I can remember include getting popped in the face putting a hole under my lip and getting 2 pearly whites knocked out clean, HAHA! YOWWIE WOWWIE those were some right hands! We don’t regret anything because in the end…hard times introduced me to HIM. HE protects us. Let. Him. In.

7. I can do any Outkast album you want to hear if we hang out! I have all of them on compact disc! If things go south between us I can also…summon Him…

8. I think that FFBMCO is the most wholesome, fun, best league in fantasy history and that The FunkyEngineThatCould is a wonderful reigning champion … and that HE…will not let us lose the crown.

10. I currently host the wonderful kids show FunkyFlyFunHouse and we just love meeting new friends and having special guests! In fact…we may even put your picture up behind us on the set here if we cross paths! We like to have fun but we’re not going to share our special title! … it belongs to HIM!
Byeeeee!!! Bye everyone, take care! Byeeeee!!! 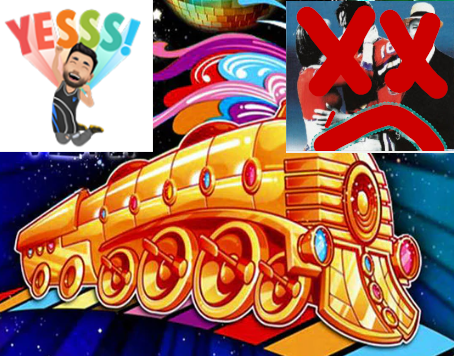 League officials aren’t sure if we should be concerned for our champ, rumor has it he was hiding out down in rural Louisiana swamps and returned like this. Inside sources say he felt slighted for not receiving an FFBMCO sponsored champion dinner which has occurred every single year except this one. The anger and rage boiled deep within him and somehow it created a monster. It created…HIM. 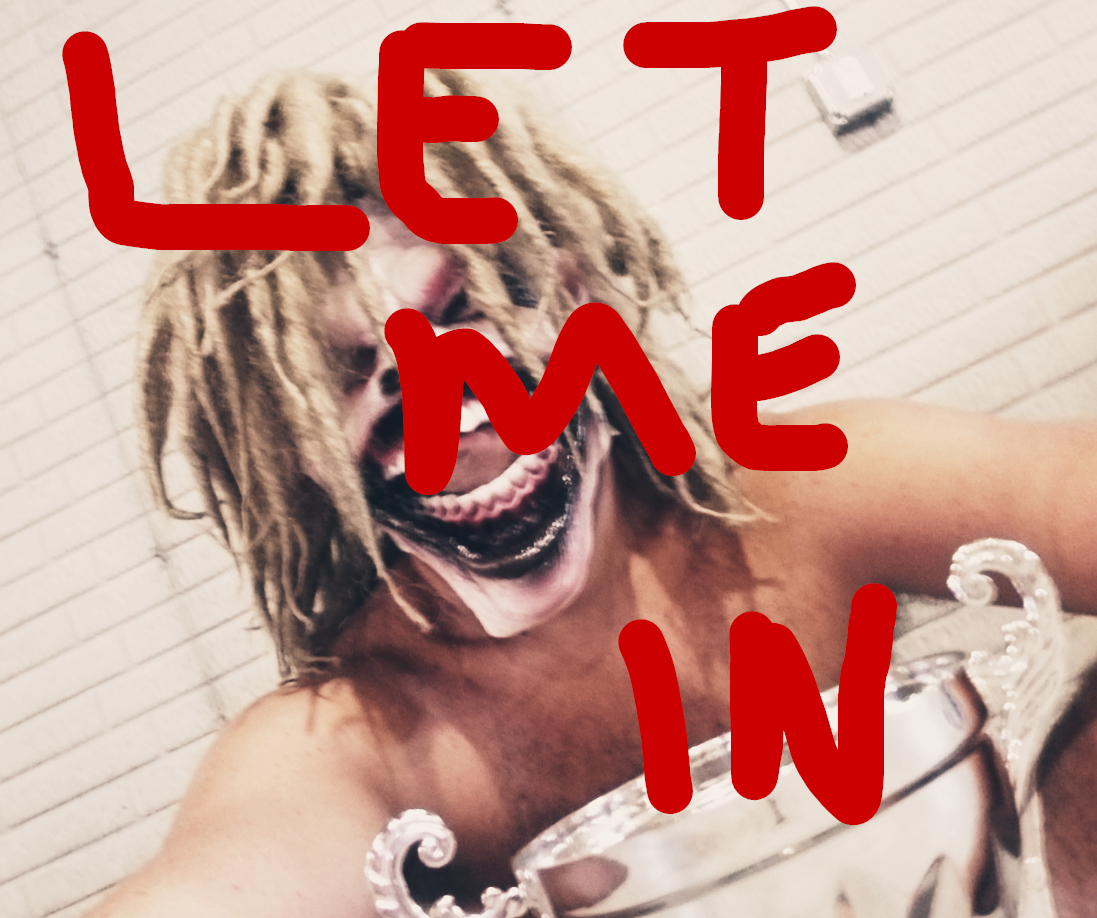 Uhhhhh…weird. At any rate, the target is now on his back and there are 19 eager competitors to snatch that spiffy new piece of hardware away from him, including a brand new FFBMCO brother…
The era of Norahsarus Rex came to a close this offseason. Nick Speck decided to hang em up and his tombstone now resides in the FFBMCO graveyard.. We had to auction off our 3rd team in league history. There were four active and eager bidders but the highest bid went to none other than Wil MacDougall, owner of Belicheckmate. 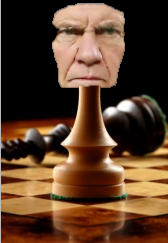 Congratulations Wil, and may you be blessed with the patience, skill and luck to turn your inherited franchise into a contender! With the excess funds of Wil’s winning bid, we will have a beefed up September challenge but we have a very special guest to provide us with 2020 league details here very shortly. In fact, let’s bring her out right now. Gentlemen of FFBMCO, this woman has waited her entire life for this year! She is a pinnacle of American Prime Time journalism. Please welcome the one, the only, Ms. Barbara Walters!!!!!!!!!!!!!!!!!!!!!!!!! 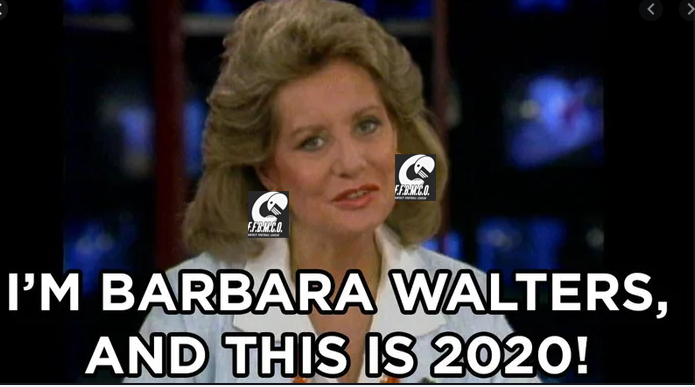 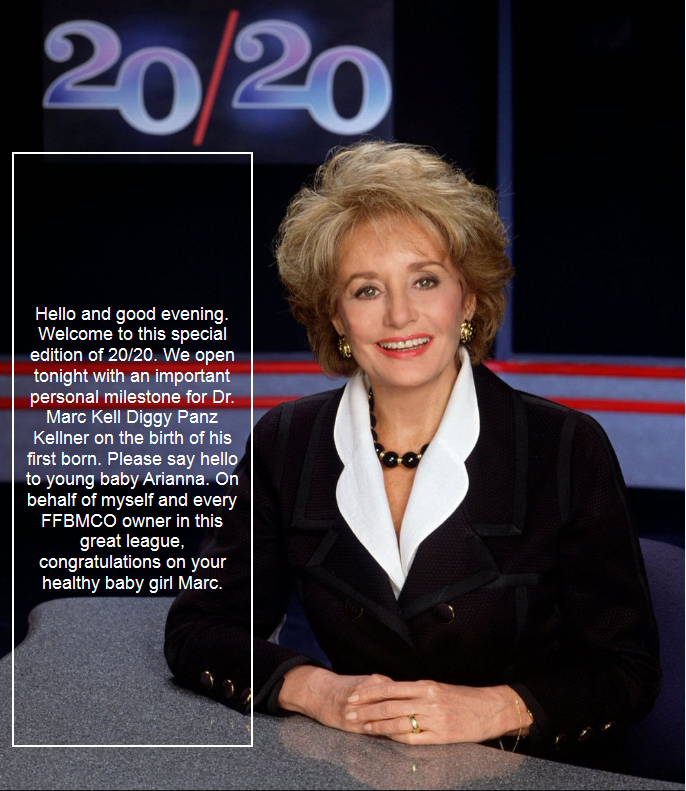 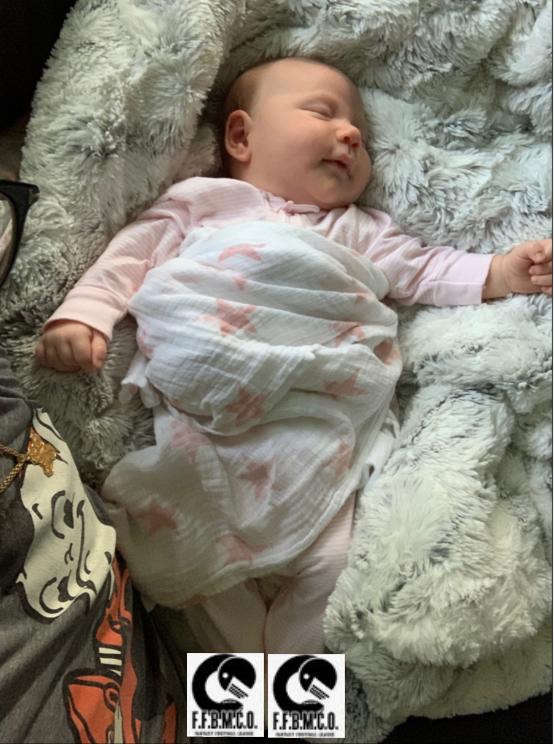 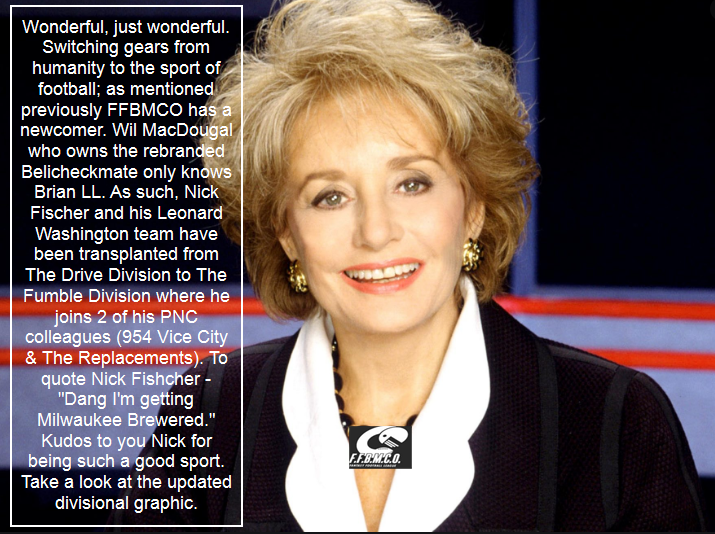 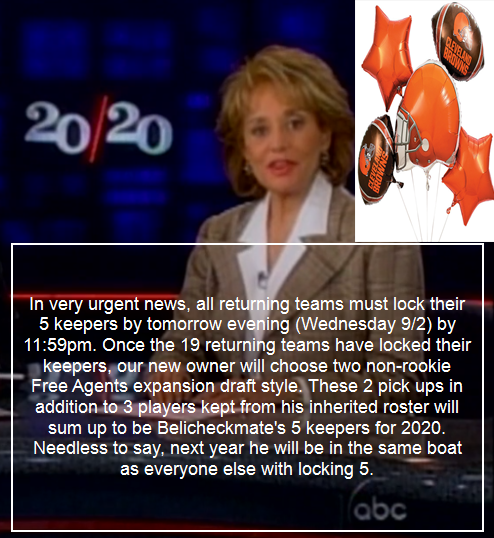 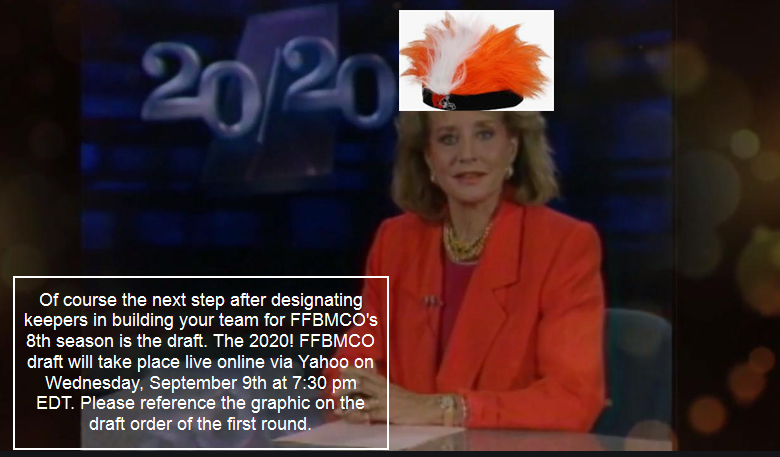 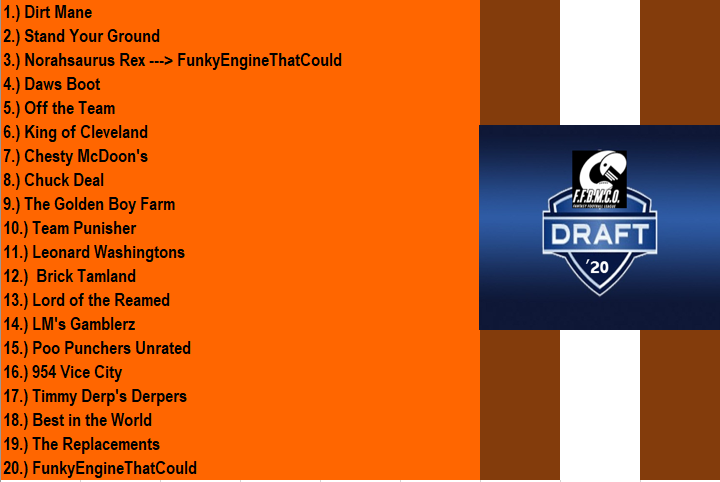 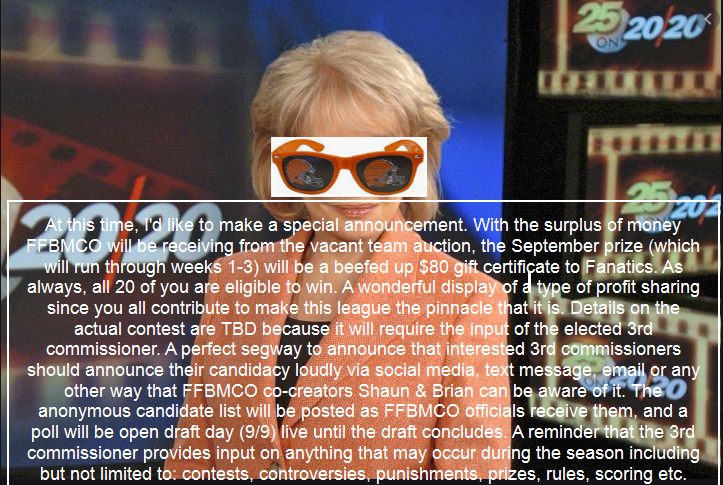 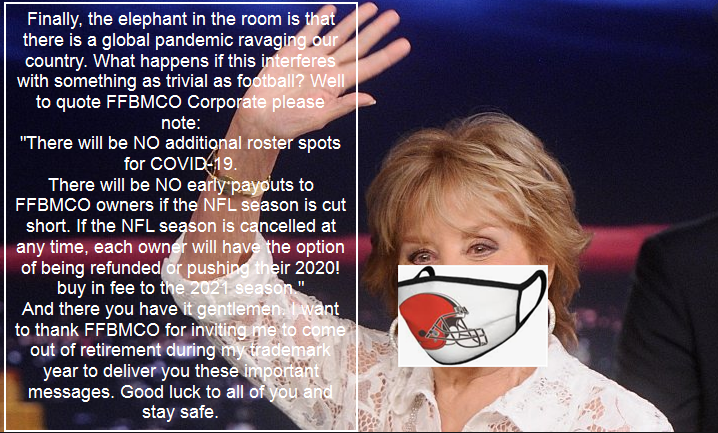