0 Browns losses since last post!
Brownies had a week 11 bye and then went down to Cincinnati and manhandled the Bengals in week 12.
LOOKS LIKE WE GOT SOME ROAD DAWGS IN HERE!
LOOKS LIKE WE GOT A GOOD FOOTBALL TEAM IN HERE!
The CLEVELAND BROWNS troll game was on fire Sunday with spark plug Damarious Randall bypassing a pick 6 so that he could instantly run directly to Raging Hue on the Cinci sideline and hand him his intercepted ball. Not to be outdone, Cleveland’s spunky QB who keeps it one hundy 24/7 pulled back and refused Raging Hue’s postgame hug. Hue was trying to solve all these mysteries but there was just too much brown and orange clue glue all over Paul Brown Stadium. These lizards are tempting the shit out of everyone! 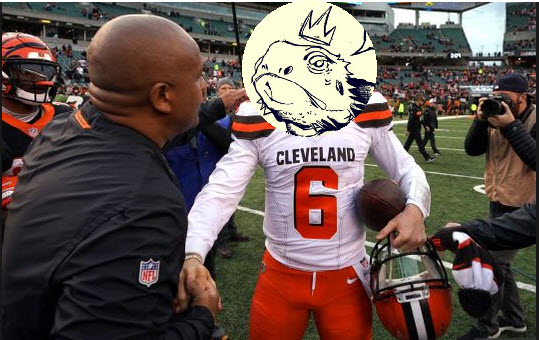 Once again we’re behind so we have to cover two weeks in one post #2weeks1post.

Week 11
Bless’m to weekly high scorer Off the Team who buried Team Punisher under 189.62 points. This has solidified Off the Team’s comeback of the year award. Team owner Brian Crez has elected to go with Akron’s own 12 Dogs of Christmas by Thirsty Dog.
His official banner will not be published yet since we are still waiting to see how many games better he finishes than last year. He is really torching that worst to first warpath that he prophesized back in August. Well done Off the Team, 2016 FFBMCO Champion!

Beat’m to Norahsaurus Rex who probably dropped (any archivists out there?!) the FFBMCO record low of 11 points. 11. Is your team about to become as extinct as the dinosaurs?!?!? My achin back…

Once again the final contest of the season is “QB with lowest amount of points scored in a winning matchup.”

The Replacements won their match with QB Dak Prescott dropping 14.82 in the process, will it stand?!? Only time will tell…

Week 12
Bless’m to the week 12 high-guy Best in the World, 2015 FFBMCO CHAMPION! GJ and team boldy marched directly on to the Golden Boy Farm, torched all the crops, and came away with a 144.9-107.68 victory. From the air, people can see the Best in the World logo torched into the spicy pepper patch. The destruction of all the crops will cost the Golden Boy Farm hundreds of thousands of dollars. Also there was a handwritten note taped to the front door of the plantation house. All it said was “Gotta score more points! Tips to know, Farina”

A rare bless’m out to a non prize winner/non record setter to Leonard Washingtons. In the current climate of tanking, Leonard Washingtons proudly declared that THEY DON’T GET BUTT NAKED FOR NOBODY. And you can tell Fish means business because…I mean look at the poses. No smile, ready to keep some pride. God help you if your sister is on Bumble. 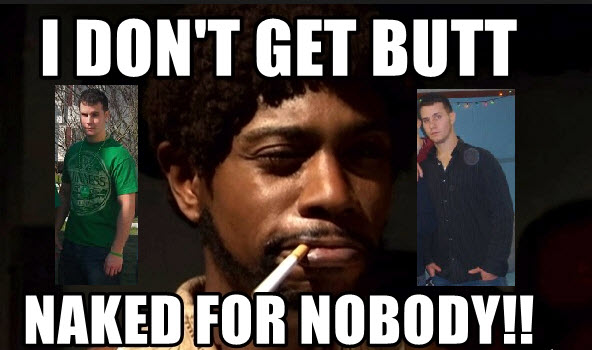 Leonard Washingtons manned up and is playing for pride and is on a quality 3 game winning streak defeating divison rival Golden Boy Farm, ex champion Off the Team, and ex champion Brick Tamland when he could have been tanking like other squads. Well done Fish and the entire Leonard Washingtons squad. While on the topic, once again (and once and for all) you can find a series of bullet points for you to mentally file away: 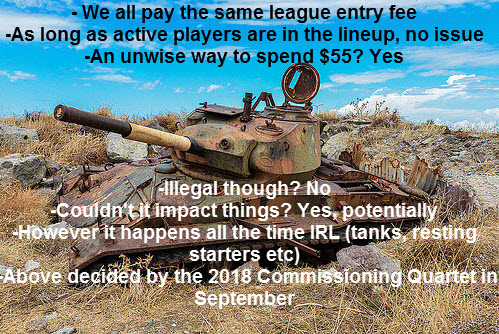 As we all know, FFBMCO doesn’t just post current year stats, we post the historical stats. This is supposed to be an organic way to encourage you to not want to have an embarrassingly low amount of points, wins, etc. However in a league like this, strategy does come into play so you do you. It’s not everyone’s cup of tea but it’s an option that everyone can use if they so desire. Some of us are alphas, some of us are soy-boy betas.
THE FUCKING END!

A trio of week 12 beat’ms unfortunately.
1. Beat’m to Poo Punchers Unrated for not starting his active kicker for some reason. A beaty strike to Uncle Mop’s record. On a positive note you won your contest prize just in time because a strike in a contest period disqualifies that team. Boston Market delight, but you are sadly disqualified for final contest.

2. Beat’m to Norahsaurus Rex for starting inactive Joe Flacco when a healthy and vibrant and starting Famous Jameis Winston was rostered. Even though Norahsaurus pulled out the win, the fact that a capable replacement was on the team means STEERIKE! Also, in order to win the final contest of the 2018 season the QB with the lowest amount of points had to actually play so you are not the current winner of the contest and you are disqualified from it. Wa waaaaaaa.

3. Beat’m to low man Dirt Mane, yet again. So dirty, so filthy, so repugnant…Mane.

Heading into the final regular season week of the 6th season, we have many things going on.

-As mentioned, Off the Team is the Comeback of the Year winner. He is currently sitting at a +8 and going for +9 this weekend which would be the biggest 1 year improvement in FFBMCO history. From worst! To first! To be the man…YOU HAVE TO BEAT OFF!!! … the TEAM!

-Also…Off the Team is the current leader of the final contest. Nick Mullens scored 10.74 points in Off the Teams week 12 beating of FunkyEngineThatCould.

-The Frowns Conference, land of 4 of 5 champions, currently has only 1 team with a secured playoff!?! berth. Off the Team is not only in as The Move Winner, he is the clear cut one seed on that side of the bracket. Das Boot, The Replacements and Norahsaurus Rex are out of it, but the other 6 teams are all still alive for now. PLAYOFFS?!?!?!?

-The Clowns Conference, land of our most recent champion, has all 4 playoff teams secured yet none of the seedings secured. The Drive and Red Right 88 Divisions will be determined this weekend, and with that the corresponding matchups will be created. This is Chuck Deal’s first time in the dance!

Sharon Jones & the Dap Kings’ It’s a Holiday Soul Party on physical compact disc is festively spinning and pumping out good vibes to all 20 owners. 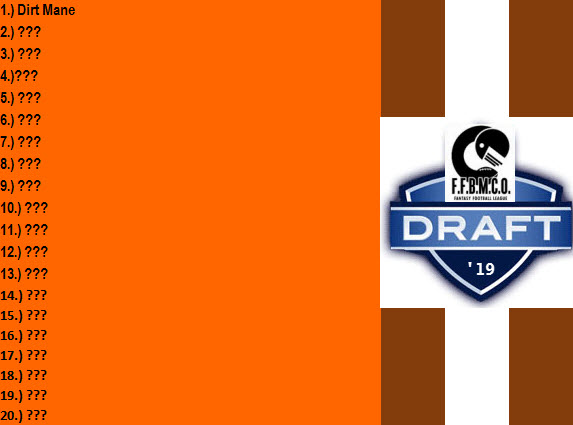