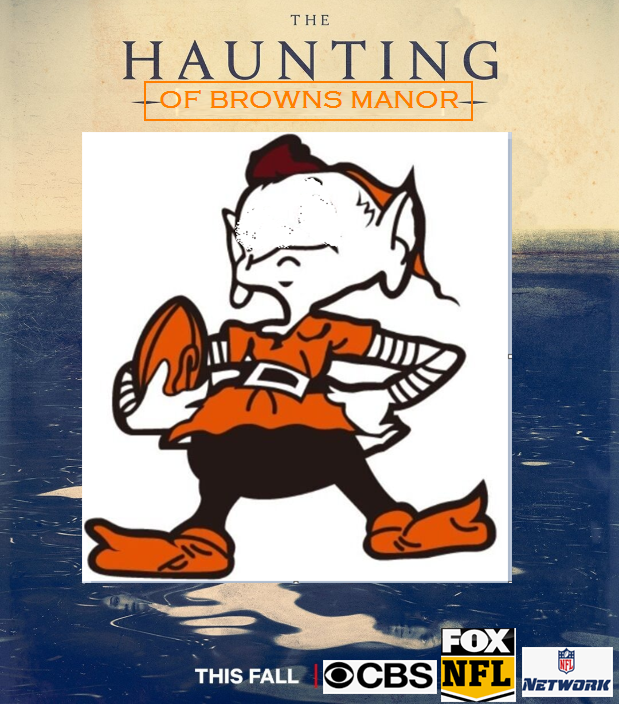 (British Accent) This isn’t exactly a short story you see, but it is one that includes ghosts of all sorts. You see back many decades ago, the Cleveland Browns were the premier professional American football franchise in all the Yank land. They made 10 straight championships and won 7 of them. Led by THE Lord Paul Brown himself, the Browns were world champions in 1946, 1947, 1948 , 1949, 1950, 1954, 1955 and 1964. So many great men wore the Cleveland Browns uniform. Otto Graham, Marion Motley, Bill Willis, Dante Lavelli, Lou Groza, Jim Brown, Leroy Kelly, Paul Warfield. It is true, yes, that the Browns franchise did lose some of their moxy and dominance. However like anything else great, it persevered and re-established itself as an AFC titan in the 80’s and a regular playoff participant the first half of the 90s. More great men – Brian Sipe, Ozzie Newsome, Bernie Kosar, Kevin Mack, Ernest Byner, Clay Matthews, Webster Slaughter, Eric Metcalf, Felix Wright, Eric Turner, Michael Dean Perry put in blood sweat and tears to give the people of Northeast Ohio pride. And then…
Gone.
Old Man Modell could no longer could no longer afford to own an NFL team but the NFL did the strangest of things…they incentivezed him to move this rich, historical franchise to bloody Baltimore. For three long, cold, dark seasons the NFL did not have the Cleveland Browns. But wait then…in 1999, the Cleveland Browns rose from the ashes like a phoenix, complete with their original colors and history! But the world can be a cruel, cruel place. What the media told the people of Northeast Ohio were the Cleveland Browns, were really nothing more than a continuous circus of clowns. The Cleveland Browns have not existed in a very long time now. The poor Ohio blokes are conditioned for suffering. Anything of the opposite is a strange, unfamiliar feeling. During moments of 2018, as well as this current season, it appears as if the ghosts of the past are trying to help these clowns to shed their clownnie ways and once again return to the echelons of being an AFC competitor. So many lost and forgotten souls are just blurs that some barely remember and many don’t remember at all. Jim Pyne? Jamir Miller? Kevin Johnson? Quincy Morgan? Dennis Northcutt? Gerrard Warren? William Green? Sadly, the list of lost and forgotten souls runs all the way up to present day. Justin Gilbert? Deshone Kizer? Corey Coleman? This once proud franchise turned league laughingstock shows promise every now and again. If Lord Brown can somehow help intervene maybe this cast of characters can help turn things around. What we’ve seen thus far are 2 embarrassing losses to the division leaders, opponents the Browns must compete with someday, let alone defeat, if they truly want to reclaim relevancy. However all I know is that when Brownie the Elf looks at himself in a reflection…he sees some half erased version of his face, and he does not like this.

Week 5 HURT – Brick Tamland tallied 56.3 points for the weekly low. Ol Bob is a Dive Bar skeeball champion and and FFBMCO champion. Which begs the question…was he ever the low scorer in a skeeball game?
Week 5 HEAL – Poo Punchers Unrated headed by fresh #girldad Mop Kellner piled up 138.5 points for the week 5 high. He has really been experimenting with gin cocktails lately and well, I think the results speak for themselves.

Week 6 HURT – Poor Stand Your Ground. In a week where there were 57.14 and 56.58 teams, Scott owns the lowest with a 56.22 mark. It might be time to start scouting the NCAA for a blue chipper to right this tattered ship.
Week 6 HEAL – Timmy Derp’s Derpers took the week 6 high with 137.56 points thus further complicating his love/hate relationship with his franchise. Timmy Derp recently got married so maybe he’s just showing off for his new bride?

The closest someone came to 103.1 points in week 5 was King of Cleveland with 104.06, but that doesn’t beat Daws Boots’ 103.54.
Week 6’s closest was FunkyEngineThatCould’s 104.82 meaning that Matty Cole and his Daws Boot squad just have to hang in there for one more slate of games before getting to choose some wonderful treats from Malley’s.

Quick shout out to 2019 FFBMCO runner up and defending Frowns Conference winner The Replacements for remaining perfect with a 6-0 record. Like any great and aware owner should, Joe K immediately contacted the league and wished to invoke the QB Insurance rule which prioritized him in getting Dak’s backup Andy Dalton. The ride to perfection just got a whole lot bumpier with Awful Andy at the helm but great job so far and best of luck for the remainder of the season!

We are 6 weeks in of a 13 week regular season…YOU do the math!

THE HAUNTING OF BROWNS MANNER