OK, we won a game against the Cincinnati Bengals in Week 2. We then defeated the Washington Football Team in Week 3. That’s called winning “two in a row.” This past Sunday we beat the Dallas Cowboys. This is called a “winning streak.”

The Typical Clowns are trying their damndest to evolve into the Cleveland Browns. Hunky heart throb HC Kevin Stefanski is becoming a maestro on the sidelines. The offensive line is a fortress of protection. Baker Mayfield is playing smart risk free football and may just yet turn back into that fiesty little Lot Lizard that captured our hearts in 2018. Myles Garrett is a ferocious animal. Browns are showing so much progress and skill which only means…COVID will ravage the NFL and the season will be lost

Speaking of the ol coronavirus, as stated in the initial post before we officially began, we all roll with the punches together. If the NFL cancels the season, then FFMBCO will be cancelled and you can elect to get your money back or just keep it banked for next year. The Yahoo related notices will continue to be posted to the Facebook page as they come in but here’s the most recent one related to the Titans. 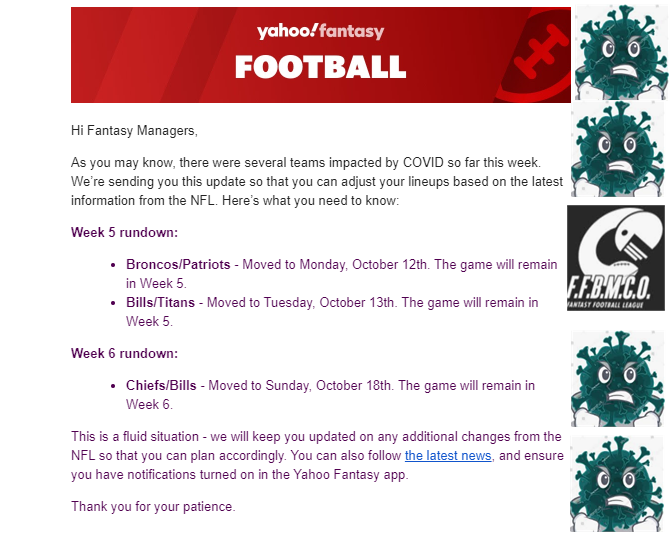 REMINDER – Do not fall for faulty misinformation on Facebook. Brian LL, Shaun H & Charlie S represent FFBMCO Corporate so if a post comes from anyone outside of this triumvirate of scholars it is not sanctioned.

(week 3) HURT to 954 Vice City who owned the weekly low of 71.64 points. His beat up, tattered squad is on life support and sadly other owners know this unenjoyable feeling as well.
(week 3) HEAL to Lord of the Reamed for piling up 164.94 points. Adam Danny Tillett owns this lewd team and he used to be so vocal. Where has he gone? Does he still exist? I hope he drives safely in his Ford Mustang while on the road.

(week 4) HURT to Stand Your Ground whose 74.3 points was a hair less than Belicheckmates’ 74.7 points. Poor Scott needs an Outer Banks vacation or an open bar piano man fundraiser to mentally revive him and give him the gusto to steer his franchise around.
(week 4) HEAL to freshly married Timmy Derp of Timmy Derp’s Derpers who stacked 154.2 points up. Hobbies include cheering for the Browns, playing golf, and yelling HOLD ME NOW! when good things happen.

Now that we’re in October, FFBMCO would like to recognize the September Optimal Lineup winner.
Nick Fischer of Leonard Washingtons won that contest handily and he is jacked to receive his Nike driFIT polo that he can wear while horseback riding with his new romantic interest.
Nick got to choose the color scheme (Ohio State) as well as what FFBMCO related logo to put on the breast of his new shirt. He demanded that only F.F.B.M.C.O. be sewn across the garment because “I don’t want people staring at my chest trying to figure out what the hell is on my shirt.”
Normally Fish embraces people looking at his chest since he wildly sends out un-asked for shirtless selfies but maybe he is settling down now that he has found a cowgirl.
At any rate, congratulations to Nick and his Leonard Washingtons team.

As mentioned on Facebook, the October contest is another creative gem hatched from Chuck Deal’s interesting mind. The team with the closest one-week total score (valid during weeks 4-7) to 103.1 (spooky Halloween is 10/31 after all) will win $25 worth of whatever they want from Malley’s Chocolates (https://malleys.com/)
After the first week, Matt Cole who leads Daws Boot is our leader with his week 4 score of 103.54.
In the event of a tie, we will go to record during the contest as tiebreaker 1 and total points scored during the contest as tiebreaker 2.
Malley’s…getcha some #CHOC.

We are about a quarter of the way through and our 2019 FFBMCO runner up is the last undefeated team of 2020. Way to go Replacements.