Good day all you cool cats and kittens! The nation’s always in for a treat when the Dawgs on the lake are playing on Thursday Night Football, right Mason?! This time around it was the striped intrastate foe that live in Paul Browns’ second rate home down by the river. No opposing player got bludgeoned with their own helmet, but the Browns did beat their opponent specifically on the offensive side of the ball and more specifically via the ground & pound 1-2 punch provided by the 2020 version of Kevin Mack & Ernest Byner; Nick Chubb & Kareem Hunt. Even Baker was reminding some of us that he still may have some sultry lot lizard traits that he wants to share. Rumor has it that Joe Burrow is going to meet Joe Exotic in the big house for a knowledge sharing session regarding caring for a family of tigers. The pride and joy of Athens, Ohio is starting to fret because he’s lost two games in a row which is uncharted waters for him.

Before we jump into FFBMCO action, one of our brethren became an officially married man. Timmy Derp’s Derpers owner Timmy “Derp” Stiffler tied the knot with his bride Chelsea the day after the Browns offense euthanized those little tigers. Congrats to you both Timmy Derp!

We’re only through week two and we only have four 2-0 teams remaining! One is a familiar solid squad who almost won it all last year while three are new and improved up and comers who broke through the shackles of their less than desirable franchise reputations each vowing to make some noise this year. Well done to all four teams but especially the three teams who are humming in turning things around so far.

Speaking of…our undefeated points leader is one of those turnaround teams and is the Vegas favorite for winning the Comeback of the Year award. Leonard Washingtons don’t get butt naked for nobody, but they are putting on a show after two weeks. Nick Fischer, owner of Leonard Washingtons, spent all off season flexing in the mirror and taking selfies and somehow that translated to his best start of his tenure and he is still flawless in the optimal lineup September challenge. Here is where teams rank with only 1 week to go – 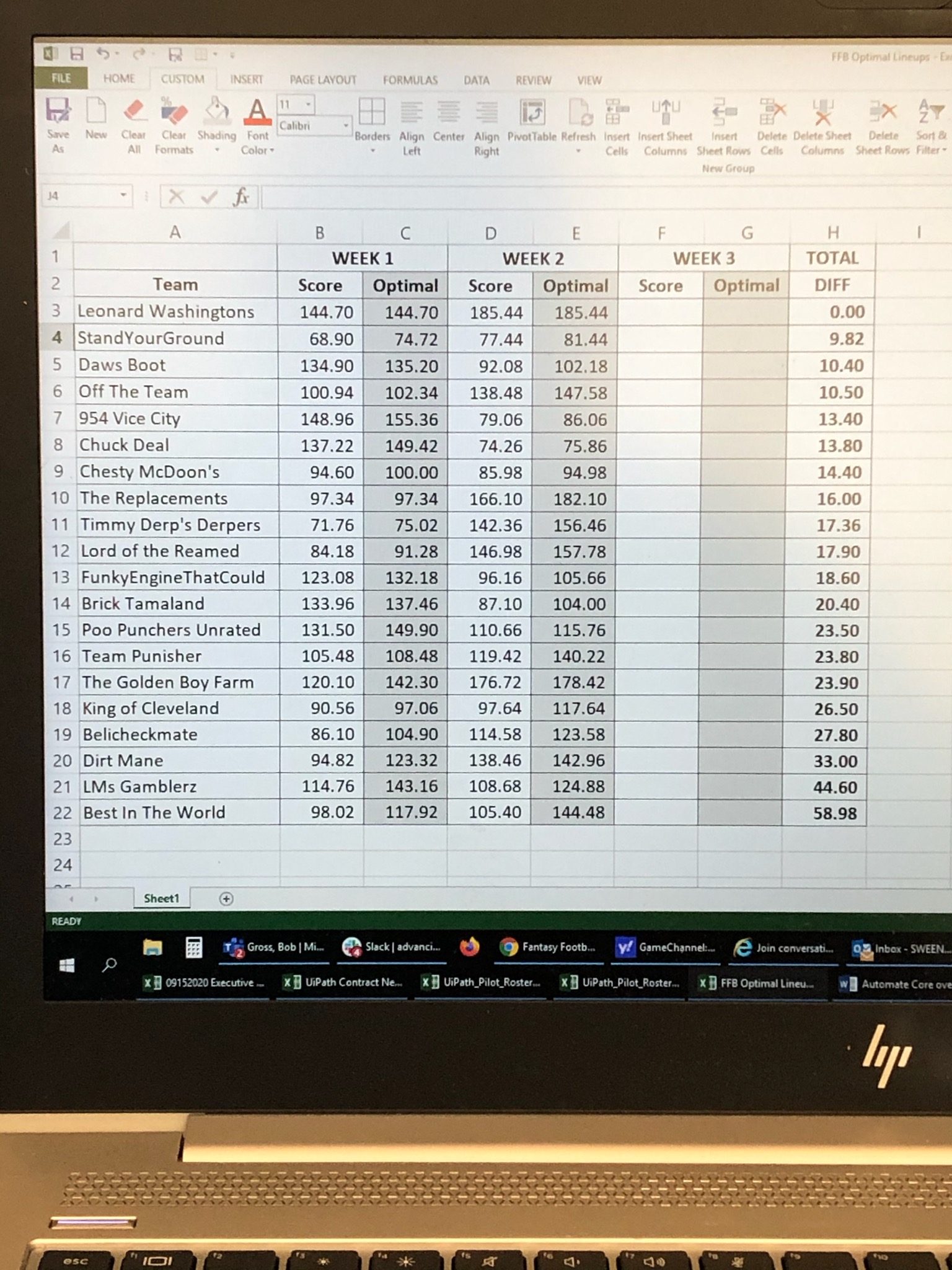 HURT goes out to our 3rd Commissioner who came up with this creative contest for being behind the week 2 low of 74.26. Universal karma prevails once again as Chuck Deal’s owner was busy stealing in-home microbrews at FFBMCO Corporate instead of enjoying the vast supply of many different beverages provided publicly for guests over the weekend. Sweet justice.

HEAL goes out to none other than the Leonard Washingtons who won by over 100 points while dropping the week 2 high of 185.44. When asked for comment on his hot start Fish just incoherently yelled something about Bumble and some rich dime from Revere who owns horses.

Just the annual reminder that the golden truth source of standings is below, not the Yahoo interface. After 8 seasons Yahoo still doesn’t completely do what we want it do or recognize how we are set up. Have a pleasant first week of autumn and I hope you avoided the deadly injury bug that struck so many this past weekend.